It’s been out for a week, and the response to Marvel Studio’s latest film in its superhero franchise has been staggering.  The biggest opening weekend of all time–and its on its way to beating the original Avengers film’s total box office of $1.5 billion within the next five days or so.

But beyond the box office, Avengers: Infinity War is also a bit of a cultural milestone, with a wonderfully weird agreement between filmgoers to avoid spoilers when possible (a shared hashtag, #ThanosDemandsYourSilence, was created by the filmmakers)–because they want everyone to have that same experience upon first viewing.

If you’ve seen the film, you know exactly why avoiding spoilers is so important.  There’s that one scene.  And that other one.  And that’s just in the first ten minutes.  By the end of the film, when the theatre is full of people in an emotionally-shocked state as the credits role, do we fully understand.  You know.  That scene.

And that scene is the culmination of why Avengers: Infinity War is more than just a superhero film.  It’s a pretty stellar piece of filmmaking on every level, far better than its two predecessors.  Written and directed by the same team that messed up Captain America with Winter Soldier and then broke up the gang with Civil War, Infinity War does what Marvel has suggested was possible ever since Nick Fury showed up at the end of the original Iron Man and shocked Tony Stark with the words, “I’d like to talk to you about the Avengers Initiative.”

Over ten years, in 18 films created by a very different group of writers, directors, and actors, Marvel has created a very solid and unusual thing in movies: a shared universe. We’ve gotten used to it over the last decade–the idea that characters from one movie share the same storytelling space as another–but it’s quite unusual because in that they aren’t telling one continuous story.  Sure, there’s Star Wars and its galaxy far, far away, but until recently those films have all had one purpose: to tell the story of the Skywalker Family, one film at a time.  Harry Potter has his Wizarding World, but even with the addition of Newt Scamander and Fantastic Beasts, it’s still mostly one story.  Star Trek is nothing but sequels and reboots, James Bond is one long story arc retold every time a new actor is cast.  The Marvel Cinematic Universe, as it’s called, is unique.

It’s unique because it actually works the way comic books do.  Anyone who has read a comic book from one particular publisher (I’ve always been a Marvel fan, starting with the infamous Mutant Massacre and Power Pack from the 1980’s) knows that their favorite hero has their own story–but will often run into other heroes.  It’s not weird in comic books for Spider-Man to encounter the Fantastic Four.  They may even team up for an adventure, then head back into their own world.  Power Pack is a great example of how this works: they were kid superheroes who also battled evil aliens and who would be ideal for their own film series, since they literally knew and even had Thanksgiving dinner with Wolverine, Kitty Pryde, Cloak & Dagger, Beta Ray Bill, Thor, and Spider-Man. Frequently, one over-arching storyline would affect characters across a wide variety of titles and then culminate in a huge crossover title where all the heroes who had been affected by the events join together for an epic battle to save the universe.  (Secret Wars with the Beyonder in the 1980’s was a great example of this.)

But movies?  Movies have sequels, sure.  But until Marvel came along and introduced the idea of a shared universe, movies did not have a shared continuity between completely different stories and characters.  Chronologically, the Marvel movies (beginning, obviously, with Captain America: The First Avenger) have been telling many distinct stories with one very large shared background narrative.

The Marvel films have all had unique voices for the most part, with solid beginnings for the heroes followed by more inventive second or third films.  This has given each of the heroes in Infinity War their own unique voice.  Scott Derrickon’s masterful work on Doctor Strange (as trippy a film as Inception in its own way, and one of Marvel’s best) is so different from Joe Johnston’s work on the original Captain America (one of my favorites, and Joe’s love of period pieces keeps the film from getting corny, even as it introduces us to Red Skull, Hydra, Bucky, SHIELD, and sets the foundation for the rest of the Marvel films).  Kenneth Branagh brought Shakespeare to space with the original Thor while Taika Waititi turned the thunder god into comedic gold with the funny deconstruction of that Shakespeare mythos, Thor: Ragnarok.

Which really brings me to my point: Infinity War is more than just a superhero film.  Because Marvel took ten years to get to this point, where nearly every character from their shared universe shares the screen in a battle against the mad Titan, Thanos, it earns every bit of its emotion.  By spending a decade introducing the characters and their stories, Marvel took time to build in the goodwill and love people have for the Guardians of the Galaxy, the best family of misfits to grace the screen in a long time.  By working with Sony to fix Spider-Man, we finally have (in Tom Holland) the best version of the friendly neighborhood kid with radioactive blood.  By making sure Black Panther was a freaking awesome film (one of the best in the MCU), when the moment those drums start, you know Wakanda is showing up soon.

Infinity War shows what happens when a studio head cares about the story as much as he cares about the IP.  IP (intellectual property) is used everywhere these days, and usually not in a good way.  IP is the stuff a studio owns that it can make money off of.  But if you care more about that than you do the story your IP tells, you end up losing a lot of goodwill. (Ahem, DC Universe.)   The reason the Marvel films have made so much money over the last ten years is because the idea of using all the IP quickly has not overridden the idea of using that IP to tell a great story.

The Marvel films aren’t perfect, but they are certainly not bad cinema.  And they tell a heck of a great story across a wide variety of genres, and “superhero” is not one of them. The reason they work is because inside the Marvel universe are any number of genres, which happen to have a superhero in the plot.  Guardians of the Galaxy is a great sci-fi comedy first and foremost.  Captain America: Winter Soldier is a really good spy thriller.  Spider-Man: Homecoming is nearly a teen coming-of-age film, while Black Panther is a family drama.  Ant-Man is a heist film.

Taking all these very different characters, whose films were overseen by different directors and writers, and putting them in one movie may seem like a recipe for disaster.  (See Avengers: Age of Ultron, which is not the best MCU film, and there’s a reason for that named Joss Wheadon.)  But the gamble Marvel has played since the beginning pays off in spades.  Infinity War is not just a superhero film.  It’s a new way of filmmaking that honors the filmmakers and storytellers who spent a decade making these movies while doing something new and groundbreaking.  And yes, I’m talking about that scene. 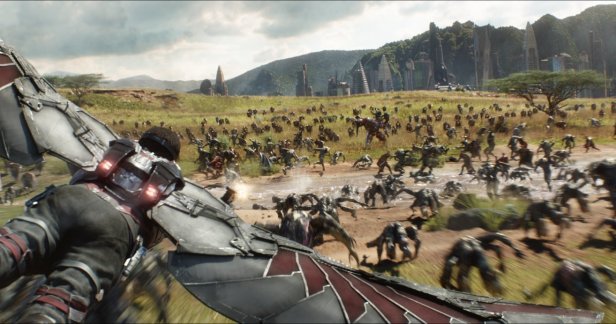 When the credits rolled at the end of Infinity War, my family was a bit of a hot mess.  My daughters were sobbing, I was wiping tears off my face, my wife was sniffling like crazy, and my oldest son was rudely gesturing to Thanos.  Why?  Because Marvel did the unthinkable: they made “comic book” movies into stories about people who may have superpowers, but who are relatable.  The Marvel heroes are quirky, irritating, funny, emotional, broken.  Just like us.  And when the worst of all possible outcomes hits people like us, we feel very deeply.

The emotional stakes of Infinity War are higher than any other comic book film, and they are one hundred percent earned.  It’s a story full of laughter and hope.  It’s also full of tears and loss.  It reminds us that the stakes in life are high and somewhat dangerous, even for the “super” among us, and that we must stand together, even when all seems lost.  It’s a powerful film, wonderfully made.  It may not win the Oscars or get a 100% rating on Rotten Tomatoes, but it’s the best movie of this year because it’s not afraid to go to places you never thought a “superhero” film could go.